Castles are never how you imagine they’re going to be. You picture yourself wafting from medieval great hall to windswept rampart, the imagined accompanying strains of Enya or Clannad making you feel ever so slightly weepy, when in reality you find yourself in rubbish-strewn, freezing ruins with Sam and Betty from Wisconsin, their shell-suited thighs swish-swishing in unison as they loudly demand where the cafeteria is, and screaming, disappointed children asking where the real knights are and can they go to McDonalds. 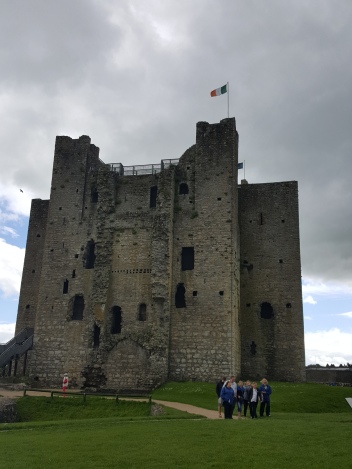 Thankfully, Trim Castle was not nearly this bad. Built in the 1170s by Hugh de Lacy, it’s the largest Anglo-Saxon castle in Ireland, and it’s quite something.

I drove into Trim, delighted to see the name of the town carved, completely without irony, I suspect, into a neatly trimmed bush by the roadside. And then there were the magnificent ruins, complete with pretty intact keep, through which I took a very informative 45-minute tour. It was bloody freezing and the ramparts were indeed windswept, so I was happy. Our guide enlightened us on various points of trivia I hadn’t realised I had always wanted to know: the origins of the word wardrobe and the phrase “getting the wrong end of the stick”, why castles were surrounded by walls and gates and moats (the primary reason was not for defence), and why you did not want to be a left-handed soldier in medieval times. We climbed to the top of the keep and froze as we gazed through the milky, inadequate summer sun at the house where Jonathan Swift wrote Gulliver’s Travels. Who knew?

After wafting romantically across the remnants of a drawbridge and narrowly avoiding being shat upon by an enormous bird, I asked directions to the Hill of Tara in a tiny shop that advertised itself as having the “Best Icecream in Ireland”.

“Sure you go out der, yeh der, and sure you take the first left then the second right then you want to be going on up the hill der until the seventh tractor past the farm, then you take the third left past the Spar and sure there you’ll be. Although you might not, sure enough.”

OK, I exaggerate, but not much. I stood, perplexed, as the man expertly wound snowy mounds of soft freeze into a large cone. I toyed with the idea of buying one but decided he may take it as a sign that I was grateful for his help. Then I bought one anyway, deciding that even if I never found the Hill of Tara, at least I would have tasted the best icecream in Ireland.

Then I went next door and asked again, and I was soon on my way.

The Hill of Tara. Now this was something I had dreamed about seeing for some time. Tara is an archeological site of huge significance, rumoured to have been the seat of the High Kings of Ireland. It contains a number of ancient monuments, including a small neolithic passage tomb known as Dumha na nGiall (the Mound of the Hostages), which was constructed around 3,400 BC. 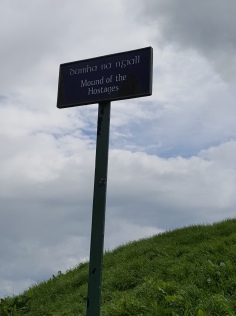 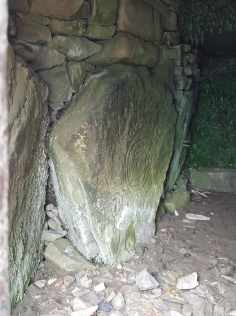 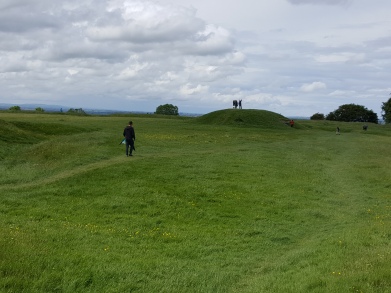 For such a significant place, it was jolly hard to find. I wound along obscure country lanes and up and down fetching green hills for some time before finally emerging in a small square half-filled with cars and earnest-looking tourists. There had hardly been any signage that I could see, and this was one of the most revered ancient sites in Ireland. It puzzled me. Perhaps the Irish don’t want us to find it, I mused, as I made my way towards the small church that now doubles as a visitor centre. I spent a happy hour meandering over the hills and mounds, dreaming of what once was, imagining ancient pagan battles and feasts and burials and rituals. I watched with interest as a middle-aged man toppled in slow motion down the Mound of Hostages, only to leap up gracefully at the bottom and race, gazelle-like, up to the top again. Nothing like embarrassment to give you wings.

Before I left, I wandered through the small cemetery and then sat for some minutes inside the church, gazing at the gorgeous stained glass window. “Sure you know what day it is, don’t you?” asked the kindly woman in the second pew. She nodded at the window. “It’s Pentecost Sunday today, and here you are stood in front of the Pentecost window.” I looked closer. Sure enough, there were the disciples gazing upwards in rapture at the Holy Spirit descending determinedly, unwaveringly, towards them. It looked like it knew exactly where it was going. It obviously had not been given directions by the man in the icecream shop. 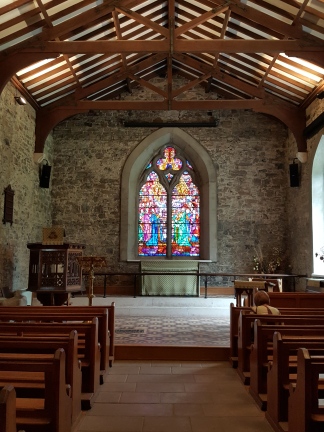 “What a perfect day for you to be here, don’t you think?” asked the woman. I smiled in agreement. It was the perfect day to be in Ireland. I visited the small book shop next, owned and inhabited by a man advertising himself as author of the renowned book, The Hill of Tara. I looked at the price then bought a smaller leaflet, and he signed it without any resentment.

It was nearly 4pm, and the jetlag was biting, gripping my head in a foggy headache. I still had to drive to Newry, just across the border with Northern Ireland. I headed out on a road I hoped was vaguely on the way to the M1, stopping in Navan this time to ask directions.

Let me take a moment here to gently muse on the phenomenon that is “driving in Ireland”. The roads are good, you drive on the left, your fellow road users (in my experience) are courteous. But Good God, the signage. The signage! 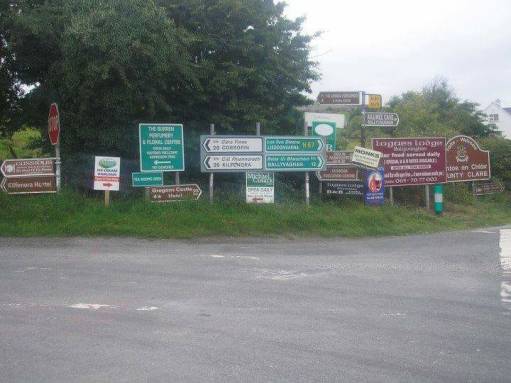 At any given intersection there will be at least 27 signs, all pointing in different directions to different towns and points of interest (though not, apparently, to the Hill of Tara). The large cities are the worst. You’ll be heading, say, from Belfast to Derry, and for the first twenty roundabouts (yes, there are that many) there the sign will be (usually Londonderry with the first six letters scribbled out, but let’s not permit Northern Irish politics to distract us here). Then you’ll come to the next roundabout and suddenly there’ll be a sign directing you to Dublin that way, Istanbul the other…BUT NO SIGN FOR DERRY. So you’ll potter through the roundabout like an old person, straining your neck for the next sign, the merry beeps of many and varied Irish drivers accompanying your meandering, when suddenly two miles later there it’ll be, but pointing you back in the direction of Bristol or New York or Auckland. And two metres after that there’ll be six more giant signs all pointing to Derry, but indicating an entirely different direction. Let’s just say it’s an adventure, and as long as you keep driving, you’ll get to your destination eventually.

So. The young man at the service station in Navan was vaguely helpful, and I pointed my little VW towards the north (by way of Abu Dhabi) with great excitement. My tiredness began to lift and my excitement grew as I approached the border. Then there was the sign: Welcome to Northern Ireland.

Well, I burst into tears again. It’s going to be a wet trip if I carry on like this, I thought. In that split second as I crossed from the south to the north, nothing had changed but everything had. This time I was really home. My tears turned to laughter and I started to sing along with “Despacito” at the top of my voice. Then I stopped, because, well, Justin Bieber.

The signs to Newry were clear and plentiful. I approached the city of my birth with a full heart and a bag of giant chocolate buttons (Cadbury’s is sooo much better in the UK).

Postscript: It was OK. The icecream, I mean. Wouldn’t blog about it.