In Crossmaglen the fire burns true
The patriotic flame will never die
And when you hear the battle cry
It will be the fighting men of Crossmaglen.

After a wildly comfortable night in a country B & B just outside Armagh (I had it all to myself. The breakfast fruits were exquisite. The photo opportunities outside my bedroom window were suitably bucolic), I spent half a day in the city trying to like it. I didn’t quite get there. Quaint, packed with cathedrals, interesting…but it didn’t grab me in the way Newry had done. I did pick up some mildly hilarious souvenirs, though. (Why miraculous? Do they stick themselves to your chest?) 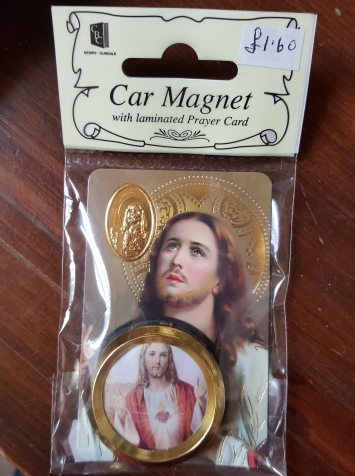 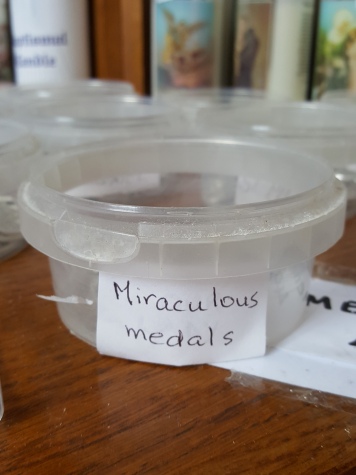 According to tradition, Saint Patrick founded his main church in Armagh in 457. It is now the ecclesiastical capital of Ireland – the seat of the Archbishops of Armagh, the Primates of All Ireland for both the Catholic Church and the Church of Ireland. In ancient times, nearby Navan Fort was a pagan ceremonial site and one of the great royal capitals of Gaelic Ireland.

The main reason I had come was not only to see the city associated with my namesake, but also to stand by the grave of Brian Boru, High King of Ireland. He was killed at the Battle of Clontarf in 1014 and his body escorted to what is now Saint Patrick’s cathedral.

There wasn’t much to see, but I spent a happy ten minutes thinking about Brian and Vikings and that wonderful song by Breton singer Alan Stivell. (YouTube it. “Brian Boru”.)

At about 2pm, after exclaiming with delight over finding an egg and scallion sandwich in the local Tesco – it’s the little things – I headed out of the city and on through Markethill and Newtownhamilton to Crossmaglen.

Ask any Northern Irish person (or British soldier) who lived through the Troubles and they’ll tell you that Crossmaglen was a place you did not want to be. It was considered the republican stronghold; the capital of the de facto independent republic of South Armagh. During the Troubles, at least 58 police officers and 124 soldiers were killed by the Provisional IRA, many in Crossmaglen itself.

As soon as I parked by the square, the place where many soldiers met their deaths and now the site of an IRA memorial, it started to hammer down with rain. I had planned to walk around the village, but that plan was quickly revised, and after driving slowly round the square and down one or two side roads, I decided I had seen enough. I stopped long enough to take a photograph, however.

It was strange to witness this IRA Roll of Honour. I wondered how many villagers stood in reverence before it on their way to buy milk and bread. I thought of those lines from Desmond Egan’s “The Northern Ireland Question”:

Two wee girls
were playing tig near a car…

How many counties would you say
are worth their scattered fingers?

There was an election coming up in the UK. I decided that Sinn Fein candidate Mickey Brady had taken serious political advantage with his billboard placement. I turned back to the car, gentle but uncomfortable whispers of memory nudging me. Soldiers. My father frisked in the street. Barbed wire and fences. Men trussed up like birds and left to rot on the road metres from our house. I shivered. It started to pelt down. I bid farewell to Crossmaglen.

The comfort of my Newry B&B beckoned, so I picked up some wine and a dinner for one from M&S and headed to Geraldine’s Palace once more. It was glorious to be back, apart from my realisation that I had bought a roast dinner that was, on closer inspection, NON-MICROWAVEABLE (yes, apparently that is a word). I looked from the packet to the microwave and back to the packet, my stomach grumbling. What could possibly go wrong? A great deal, it turns out, including Yorkshire pudding that tasted like rubber and fetching splatters of mint and brown throughout a mortified microwave (I TOLD YOU NOT TO PUT THAT THING IN ME). Nevertheless, I was content. I had wine, pastries, and muesli, and I was heading to Belfast the next day via the Mourne Mountains and Downpatrick.

I woke at 4.45am, the sunlight streaming through the decidedly non-blackout curtains. As I strapped on my eye mask and attempted to go back to sleep (unsuccessfully), I realised that I had not seen darkness since arriving in Ireland. Not even a hint of dusk or that inky pre-dawn blackness. It was June, and it was dark at around 10.30pm and light at sparrow’s fart.

If this makes you think I’m a boring old person who needed to get out more and sample Ireland’s nightlife, you’re right. In my defence: A. Jet lag takes some time to get over. B: You just wait until you get to the Belfast instalment.

Geraldine and her partner (I’ve forgotten his name. He’s not the one who stocked my fridge) got out a map and showed me the route I should take through the Mourne Mountains. We rather sadly said our final goodbyes. As I drove off I looked in the rear view mirror and saw Geraldine running down the road after me with cleaning cloths and the roast dinner packaging. I’m sure she was mouthing “Good luck you” but I could have been wrong.

Her directions had been spot on and soon I was winding up and through some of the most beautiful countryside I have ever seen. Every wind and twist revealed a new angle, a new delight. I gasped out loud several times, and stopped so often to take photos I may as well have walked.

This was the countryside that inspired C.S. Lewis as he created the world of Narnia. These were the books of my childhood; the stories I go back to again and again when I need  comfort and joy and escape. They had a huge effect on me. My cat is called Aslan. Need I say more? As I drove I thought of those wonderful stories and how blessed the author had been to have this countryside to inspire him. I was quite lost in my little reverie when I suddenly traversed the summit and headed down the other side, a new vista laid out in front of me like a lover inviting me to gaze and marvel. And gaze and marvel I did. And cried. (What a surprise.) 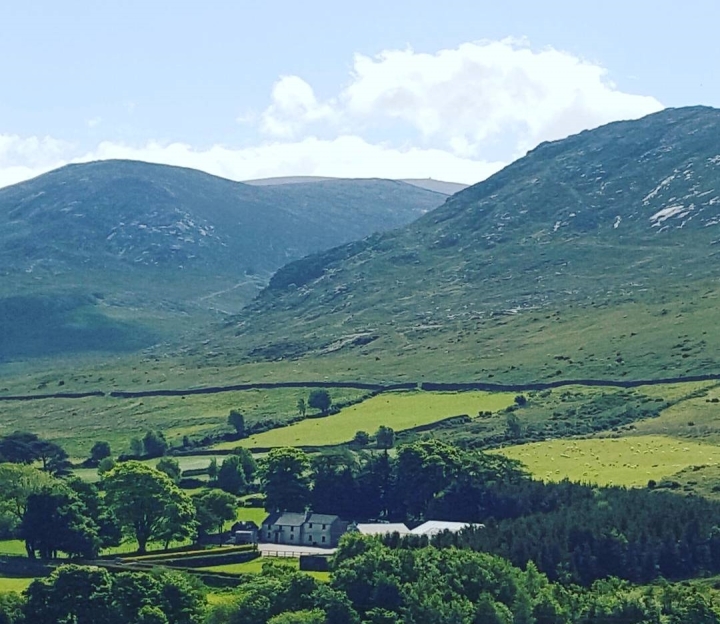 I felt quite drained as I emerged from the mountains. There’s only so much beauty one can take, I think. Sensory overload becomes an issue and one must stop and look at something ugly for a while to redress the balance. So I stopped at a Spar (the Irish equivalent of a Four Square or similar convenience store) for a quick loo break. I glanced at myself in the mirror, taking in the “I was awake at 4am” face, and decided that the balance had been redressed. I hadn’t even bothered with makeup. I was in Ireland. The day was gorgeous. I had chocolate now. Looking good was not high on the priority list. When I start scaring small Irish children, I thought, I’ll put on some lipstick and do my hair.

I consulted the map and realised with delight that I was two minutes from Tollymore Forest Park, where much of the filming happens for Game of Thrones. I had planned to carry straight on to Downpatrick, the end point of St Patrick’s Trail (which starts, unsurprisingly, in Armagh), but it was such a stunner of a day I made a split-second decision to stop.

Well, it was one of the best decisions of my trip.  I’ve mentioned in a previous post that forests and rivers and glens and “mysterious hidden treasure” landscapes are my thing. New Zealand native bush is lovely and breathtaking and spectacular, but for years I have felt as though I’ve been walking its trails and climbing its mountains (no exaggeration; I tramp) with an unfulfilled longing in my heart for some undefinable “other”. I have half-inhabited NZ and half-inhabited my longing for that “other” as I have downloaded photos and screensavers of forests and trees and gazed at them with a strange mixture of yearning and familiarity. So imagine my delight as I took the 90-minute river trail through the park and stumbled across many of the very locations I had downloaded. That’s right. Some of my “secret yearning” shots had been taken right here, in this park.

It’s a surreal feeling when you’re suddenly standing in front of, smelling, feeling, touching what has previously been just an image. It makes you a bit anxious, in fact. You start to panic. Please let me make the most of this. Can I possibly take this all in? Do I have to leave? Will I carry this with me forever, or will it become vague and unsubstantial with the passing of time?

But before we get too carried away, let’s remember that this experience was made all the richer (I’m trying to be charitable) by the various people I met.

Disclaimer: I have never watched Game of Thrones. Not one episode. Not even a trailer. I know there’s a dwarf and a dragon and lots of sex, but that’s about it. Hmmm. Come to think of it, it sounds right up my alley. I must binge watch immediately.

Anyway, as I walked, munching on chocolate buttons, I would bump into breathless and slightly wide-eyed people of all nationalities with cameras and Game of Thrones guides like well-thumbed Bibles, stumbling from clearing to bridge to tree stump with a glazed look in their eyes and sweat rings on their  “I’m with stupid” T-shirts. I’m joking about that last bit. We would exchange smiles and pleasantries until I announced cheerfully that I had never watched an episode in my life. Then I would walk on, leaving incredulity, disgust, and a dropped chocolate button or two in my wake. It was glorious.

As was the park. I was so happy to be there I stayed much longer than planned and ended up just skimming through Downpatrick in the late afternoon before making my way up to Belfast. I had been looking forward to this for days. I stopped at another Spar for a drink and asked how long it would take.

“Sure allow a good hour and a half, so you should. You might fly up der with no problem, but sure you might get stuck behind a tractor, hi.”

Postscript: hi: Northern Irish (Ballymena in particular) vernacular, added on to the end of many sentences because…I have absolutely no idea.

There can be no songs for dead children
Near the crazy circle of explosions,
The splintering tangent of the ricochet,

No songs for the children who have become
My unrestricted tenants, fingerprints
Everywhere, teethmarks on this and that.